Mistakes That I Made Whilst Paying Off Debt 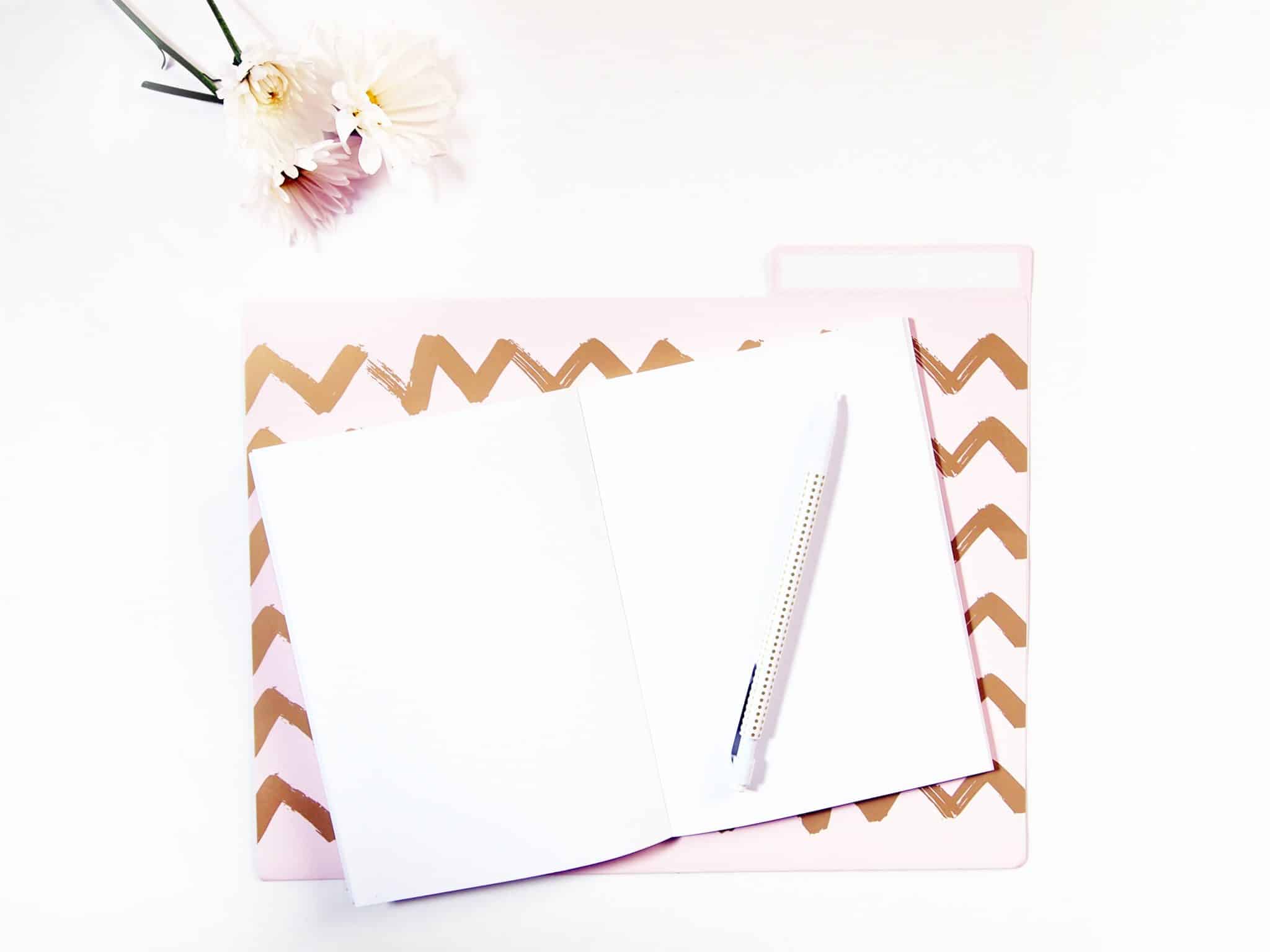 *Asterisks set out in this article relate to advertising and they indicate that the author receives a small share of sales through the related link.*

As you will know if you have been following my journey, I have recently paid off all of my consumer debt. If you have only just stumbled across this blog, feel free to read more about the debt journey here and here.

Paying off debt by myself wasn’t easy – and it certainly wasn’t pretty! However, it was 100% worth it.

If you are on a debt payoff journey yourself, it’s easy to feel like it’s overwhelming you and it will never be gone – but I promise you, you can do it. I have faith in you.

After I had my daughter, I took a big cut in pay that I found really hard to deal with. The reason for the cut in pay was that I did not return to my previous full time job, as I realised that the cost of childcare was extortionate, and that I wanted to stay at home with my chubby little blue eyed girl.

I was very fortunate because I found a job where I could work from home around my daughter – so I worked when she was napping, and when she was asleep in the evening. It was incredibly tiring.

I then managed to get myself into a bit of debt – mainly because I felt as though I ‘deserved’ to have certain things that my peers did, and was getting more and more frustrated that I couldn’t afford them.

I found it particularly difficult to not be able to take my daughter anywhere or buy her new toys or clothes.

I quickly realised that I was in a bad situation. I couldn’t afford these things in the first place, so how on earth was I going to be able to afford paying them off?

I knew that I would have to figure something out, and that meant earning more money.

However, I did not want to pay for childcare (I’m very stubborn about this!) and so needed to find things that would work around my daughter, the evening work that I was doing, and I had also started a University degree when she was 1 that took up a lot of time.

If you are interested in the things that I found to earn extra money, I talk about them a lot on the blog and on my Instagram (would love it if you came and joined me over there, it’s where I hang out!) – but as a quick sum up: blogging*, dog boarding*, mystery shopping*, matched betting*, surveys* all contributed to paying off my debt.

When my daughter started school I also found a part time job in an office with incredibly flexible hours (they are amazing to me).

Regardless of the success I had with paying off my debt, there were some mistakes that I made along the way.

I hope that by sharing these with you, it will help you become more successful on your journey, and also to know that you are not alone!

Not Looking For Supportive Communities Sooner

At the back end of my journey, I found out that there was an Instagram community dedicated to paying off debt. I am gutted that I did not discover it sooner in my journey, as the support is amazing.

I would definitely recommend heading over to Instagram and setting up your own debt account and finding similar ones.

If you come follow me you will see the people I am following and also the people that comment on my photos are mainly in this niche.

Having support is something that you don’t realise the importance of until you have it. If you find it hard to talk about it with friends or family, knowing that there are people out there on the same path as you is an incredible boost to your motivation and happiness.

Working on improving your financial situation doesn’t have to be lonely.

Not Transferring My Credit Card to a 0% One Sooner

For some reason, I put this off. I honestly don’t know why, but I did it eventually, so it’s not all bad! If you have debt, please look at your interest rates and see if you can transfer it to a 0% interest account.

However, a word of caution. You shouldn’t take out another line of credit (which is technically what this is) without reading all of the T&C’s.

I hope that if you are paying off debt you have created a good budget and you can therefore look at if you will definitely be able to pay the debt off before the interest goes up.

Remember that some expenses just pop up and you may need to pay for something unexpected along the way, so make sure that you have an emergency fund too.

MSE have a great section which covers all of the best current 0% balance transfers, so I would recommend checking these out because you can see if you will be eligible without it appearing against your credit score.

I didn’t talk enough with my partner about the debt

This is a bit of a pain point for me…and for him. In all honesty…he’s terrible with money.

Absolutely terrible. Also impossible to talk to – when I try to talk to him about money, he shuts down immediately or gets mad.

It’s been a difficult situation to be in for years, but we’ve recently had a huge discussion about it, and he has admitted a lot of things that he denied in the past.

This is good, and he is now more open to discussing money, budgeting, he wants to save money, discusses retirement with me, and wants to think of more ways to earn more money.

He still struggles with comparing himself with his friends, but my gentle comments here and there have started to penetrate his skull and he realises that he is very lucky to have what he has, and that the grass isn’t always greener on the other side.

He knew about our bad money situation obviously, but he just didn’t care. It’s hard to discuss it fully on here with you as it’s in the public realm, but he knows that what he has done in the past has been bad, and he is happy to now work in a positive way to improve our future finances as a family.

Not Treating It As Enough Of An Emergency In The Beginning

I knew I had the debt, I knew I had to pay it off ASAP, but in all honesty, I didn’t treat it as enough as an emergency in the beginning.

Debt is an emergency after all, it prevents you from so much and restricts you, but I was a bit adverse to working more than I already did, as I was pretty exhausted.

Not Allowing Myself Spending Money

In the beginning, I was pretty strict with myself. As soon as I had my daughter, I had stepped into extreme frugal mode, and it was hard to snap out of it a bit when I started earning extra cash.

I made a promise to myself that when I started earning extra I would allow myself some small – but significant – treats for myself that would contribute to mine and my daughters happiness.

It was generally small things that most people would take for granted.

When I allowed myself some spending money, it still was quite small, and I found it hard to spend money, even when I had it to spend.

I never went to the shops, so when I did go, I think that I was quite overwhelmed with all of the choices, and would think about buying something for a while before just going and buying it.

Most debt payoff journeys are quite long, so to go so long without buying things for yourself is difficult. Even the most frugal people allow themselves some treats.

As I said in a previous post, frugal living can help you to see what is truly important to you in life.

When you cut your expenses back to the bare bones, and live like this for a while, you will start to see what you are missing out on, and what would improve your life if you had.

For me, it was having a car. I really, really struggled to go without one, but I did it for years. We lived out in the countryside so it was impossible to go anywhere, which is not really fun with a baby.

I promised myself that I would have a car, and it made a huge difference to my life. I will never go without a car again.

I also allowed myself some small bits of money for occasionally taking my daughter out somewhere, or if I wanted to go on a night out with friends, I could do so without feeling guilty. I felt like I had missed out a lot socially, so this was also an important aspect for me.

I definitely went against my own advice here, and had only a tiny emergency fund. I would most certainly advise not doing this – but to have a large emergency fund instead.

You can pretty much guarantee that something will come up when you don’t have any money to pay for it.

The saying that ‘Bad things usually come in threes” tends to be quite true as well – if your car breaks down, your washing machine and phone will probably break on you too in quick succession!

Luckily for me, whilst I was paying off debt I didn’t have anything like this happen, but it’s definitely possible, so I would advise building a decent fund to help you when you need it the most.

Beating Myself Up For Past Mistakes

When you are in debt and you face up to it, you will probably find yourself getting cross with how you have behaved with money in the past that has gotten you into debt.

I was annoyed with myself, especially when I started all of the money making things that I do, because I could have started them sooner and therefore had more money – which would have meant not getting into debt in the first place.

But as they say, hindsight is a beautiful thing – there’s nothing you can do about what you have done in the past – it’s all about what you can do now in the present to ensure your future is the best it can be.

It’s easy to focus on the mistakes that we made in the past and whilst paying off debt, but hopefully reading this will make you feel as though you are not alone and I hope that it will help you avoid the mistakes that I made!

What mistakes have you made whilst paying off debt? Do you do any that I have listed above? 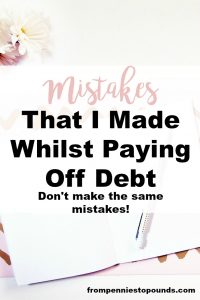 16 Comments on Mistakes That I Made Whilst Paying Off Debt